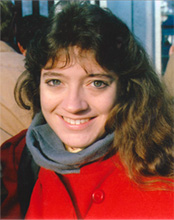 In December 1988, Jane Davis lost her daughter Shannon, a junior in Syracuse University's College for Human Development, in the Pan Am 103 bombing over Lockerbie, Scotland. With her son, James '87, and daughter Whitney '89, Davis recently pledged $500,000 to the Pan Am 103 Archives at SU to support the collection, which contains one of the largest repositories of information about the tragedy.

"The idea of the archives pleases me very much," Davis said. "Especially the idea of having all of the resources being gathered in one place and available to the citizens of the world." Davis considers the archives a fitting tribute not only to her daughter but to all of the people on the flight. "At first, we could only think of ourselves and our loss of Shannon," she said. "But then we realized the importance of all the victims, who represented 22 countries."

The archives contain information not just about the 35 SU study-abroad students, but all 270 victims on Pan Am 103, according to Edward L. Galvin, director of Archives and Records Management at SU. The collection is not fully processed, but there are approximately 200 boxes of material, and Galvin is in negotiation with other family members for the donation of more information. "This was a global event and we are trying to branch out to the United Kingdom and elsewhere to have people support what we are doing here, to make this the center for any research that would need to be done on Pan Am 103," Galvin said. "No other university lost as many as we did. There's a perpetual commitment here at SU that you won't find anywhere else."

Syracuse University has become such a central place for those affected by the event that the major victims group, the Victims of Pan Am Flight 103, holds its annual meeting on campus, as does its board of directors. The Davis gift brings the archives closer to the estimated $2 million necessary to endow an archivist position dedicated to the Pan Am 103 Archives. The archivist will process the existing materials and work with family members around the world who may be interested in donating more material. The items collected include writings, paintings, poetry, schoolwork done by the victims, and their personal belongings-such as one man's woodworking tools and another's Cub Scout pinewood derby car. Dozens of books and articles have been written on the subject and the archive strives to catalogue at least one copy of each, as well as copies of video documentaries and audio books. "After 21 years, you would think that an event like this would be fading into history," Galvin said. "But it isn't."

Making sure it isn't forgotten is one of the reasons why Davis and her children pledged their gift to the Pan Am 103 Archives. "Everyone in the world is a potential victim," she said. "We need a place where you can study and discuss what happened in December 1988. I love that SU has the vision to serve the global community."